Sean Baker’s follow-up to his breakthrough 2015 film Tangerine is once again vibrant, taut with authenticity and lends a voice to a community on the edges of society.

In the shadows of Walt Disney World, fearless six-year-old Moonee (Brooklynn Prince) and her unruly but devoted mother Halley (Bria Vinaite) live in the Magic Castle, a brash lilac motel that houses low-income families that are often trapped within the welfare system. Struggling to find work as a waitress or dancer, Halley begins selling knock-off perfume to tourists to make ends meet. An illegal slippery slope that soon spirals out of control. Meanwhile, Moonee spends her days roaming with her buddy Scooty (Christopher Rivera) and new friend Jancey (Valeria Cotto) and where they go, chaos soon follows. 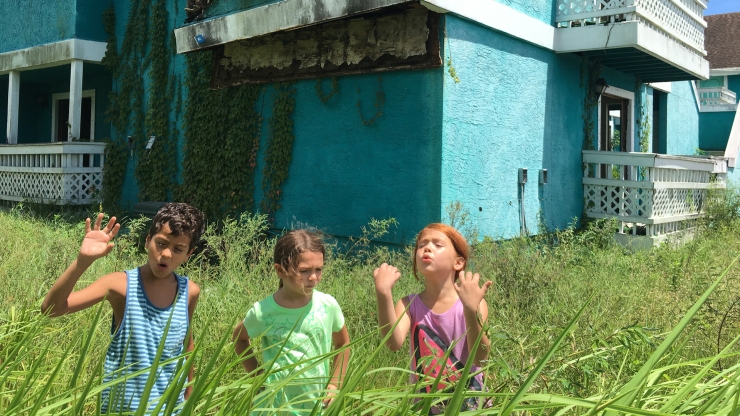 From spitting contests to scamming strangers for ice cream money, misfit Moonee is certainly a bad influence, having seemingly inherited plenty of sass from her mother. While the kids wander unsupervised, judgemental thoughts may surface, a reaction that’s duplicated by the various tourists the gang encounter. However, unlike the glancing visitors, we tag along on their many outings. Discovering that beneath essential, cheeky street-smarts, their lovable innocence shines through and their endless summer antics are just delightful to watch. Despite being a constant thorn in his side, motel manager Bobby (Willem Dafoe) lovingly keeps the tearaways inline, while nurturing his own fractured relationship with his son Jack (Caleb Landry Jones).

Tangerine was shot on a modified iPhone for budgetary reasons, which also added an element of rough realism while charting a night in the life of transgender sex workers. More polished due to an upgrade in gear, The Florida Project is bigger in scope, emphasised by cinematographer Alexis Zabe who shoots from the children’s perspective. Capturing the dizzying, towering world around them. Swapping the scorching sunsets and neon nightlife of Tangerine for a palette of pastels under cloudless blue skies, once more Baker’s film pops off the screen.

Fast becoming his signature, Baker again provides a snapshot of life for society’s marginalised. Crucially sympathetic and not condescending, like Tangerine, he showcases likeable, lived-in characters simply playing the hand they’ve been dealt. Not shying away from the harsh realities of poverty but remaining thrillingly energised, The Florida Project is reminiscent of Andrea Arnold’s incredible American Honey. Both film-makers also took an unconventional approach to casting newcomers. Arnold detected Sasha Lane’s raw magnetism as she partied in Florida and Baker discovered Vinaite’s rebellious streak through her Instagram.

It’s Vinaite’s impulsive, juvenile demeanour that adds a biting edge to the film. Reckless, with a simmering, blinding rage that’s always seemingly bubbling beneath the surface. Yet there’s no doubt of her maternal love, just a foreboding sense of self-destruction always lingering on the horizon. As for Prince, she’s simply mesmerising as Moonee. I became so accustomed to her feisty spirit that the moment (which caught me completely off-guard) when her world comes hurtling down and she melts into a vulnerable, childlike bundle of tenderness, is absolutely crushing.

Paternal warmth emanates from Dafoe in a muted, masterful performance as Bobby. A would-be father to the children and their mothers, who are strikingly just kids themselves. Meanwhile striving to see his own son frequently, their fragile bond is touched upon, with Jones subtly shining in a minor role, as he so often does.

Derived from an early project name for Walt Disney World, The Florida Project isn’t a dour depiction of the forgotten few, but a celebration of innocence that addresses thought-provoking issues along the way. A wondrous summertime adventure in which our mischievous leads spend their childhood in magical, candy-coloured kingdoms of their own.