Drawing from a number of real-life married murderers and closely echoing the disturbing crimes of depraved couple David and Catherine Birnie in Perth during the 1980s. Writer-director Ben Young’s debut is as accomplished as it is harrowing.

Set in suburbia much like other true-life Australian crime films Animal Kingdom and Snowtown, rather than the scorched outback that fuels irrational hysteria in the likes of Wake in Fright, the sense of unnoticed, nightmarish goings-on remain intact.

Rebellious teenager Vicki Maloney (Ashleigh Cummings), who is charged with anger towards her mother Maggie (Susie Porter) for divorcing her father Trevor (Damian de Montemas), sneaks out of her bedroom to attend a forbidden party. On her way, she’s lured into the home of married serial killers Evelyn (Emma Booth) and John White (Stephen Curry). In good company with many superior horror films such as The Texas Chain Saw Massacre, the atrocities unfold out of shot, with just accompanying haunting sounds, we’re ushered to empty hallways where our imagination conjures up far worse than what we could be presented.

What’s striking about Hounds of Love is the characterisation of its killers and the odd parallels between the murderous Whites and divorcing Maloneys. Both Evelyn and Maggie are involved in possessive relationships that are fueled by manipulation and domination, with hugely varying consequences. Vicki is the key that unlocks these similarities and her ability to exploit them is her only chance of escape. Despite her initial naivety, Vicky is refreshingly able to think on her feet in an attempt to outmanoeuvre her captors.

Comedic actor Curry is unrecognisable as John, who is entirely in control of the vile series of events unfolding at home. However, we see a powerless side to John as he’s pushed around by locals. Booth is equally as impressive as Evelyn, an empty shell of a woman who flickers between psychotic monster and a crumbling wreck. 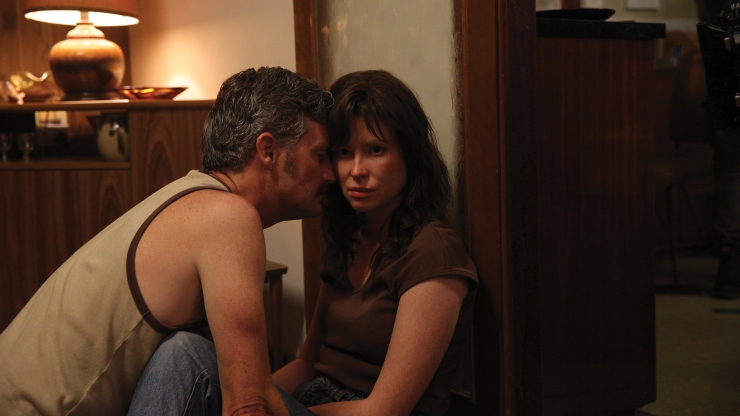 Crucially though, we’re not necessarily invited to sympathise with them or to even discover the making of a murderer, we’re simply given a chance to explore the whole picture, as is the case with Patty Jenkins’ Monster. While mystery can often be the key to horror, Hounds of Love’s psychological edge reinforces the disturbing real-life case it’s based on and thankfully avoids veering into exploitative territory.

Digging deeper than many films within the genre tend to tread, Hounds of Love is an impressively restrained debut that lingers for days after viewing.