Director Jaume Collet-Serra (Unknown, Non-Stop and Run All Night) veers away from his favourite collaborator Liam Neeson in favour of Blake Lively, who’s fighting to survive a shark attack. Inevitable comparisons to Jaws will be made, so how does The Shallows compare to Steven Spielberg’s revolutionary blockbuster?

After hitching a ride with local resident Carlos (Óscar Jaenada), medical student Nancy Adams (Lively) arrives at a secluded beach in Mexico, the same spot her late mother surfed at while she was pregnant with her. Taking a breather from surfing, Nancy video calls her father (Brett Cullen) and younger sister Chloe (Sedona Legge), revealing her mother’s death to cancer has made her doubt her future in the medical profession, the conversation becomes confrontational and Nancy hangs up to catch one more wave. Upon doing so, she swims into the path of a shark that had been feeding on a whale carcass. Bitten on the leg and bleeding heavily, Nancy manages to find salvation on an isolated rock, but with the shark still circling, her ordeal has only just begun.

It’s a slippery start for The Shallows, while making her way to the beach, Nancy’s phone is projected onto the screen, not only is it distracting, the images and text messages fail to inform the audience of anything substantial (or anything we don’t already know). However, an underwhelming opening leads to a contained, gripping and tense thriller, with Lively proving she can carry an entire movie. 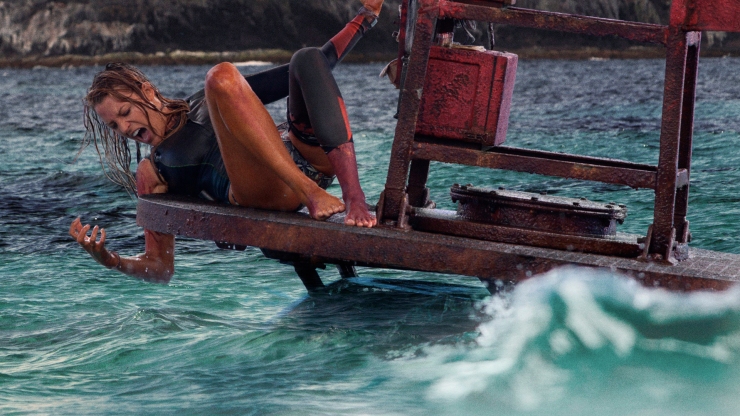 Aside from the obvious similarities to Jaws, The Shallows has more in common with JC Chandor’s All Is Lost, which sees Robert Redford fighting to survive when he becomes lost at sea. Both leads carry their respective films, but in a slightly less gutsy move, Lively’s Nancy is far more vocal, talking herself through her strategy (which is effective for the most part) and even befriending an injured seagull which she aptly names Steven (adding a few welcome, light-hearted moments amongst the tense and bloody scenes). Similar to 2008’s Taken, The Shallows should have ended exactly one scene earlier, the parallels between Nancy and her mother’s battle to survive adds an emotional edge, but the concept becomes overly sentimental as the final scene plays out.

Bookended with scenes that should have remained on the cutting room floor. The Shallows still succeeds as a gripping thriller that has a few surprises, such as rooting for the shark when a certain shady character emerges and starring a strangely likeable seagull. The Shallows not only showcases Blake Lively’s talents as she performs a one-woman show, but is the highlight of Jaume Collet-Serra’s filmography.