Changing the game for the action genre in 1981 with Mad Max 2: The Road Warrior, director George Miller rewrites the rules once more. Reviving his Mad Max franchise with Fury Road, the most exhilarating cinema experience in recent years.

Each of the Mad Max films, including the latest, have distinct personalities. Separating Miller’s franchise from others that churn out more of the same with each new film. Fury Road sees our titular antihero tormented by the victims he could not save. On the verge of losing his mind, he now simply drifts and survives in the wasteland. 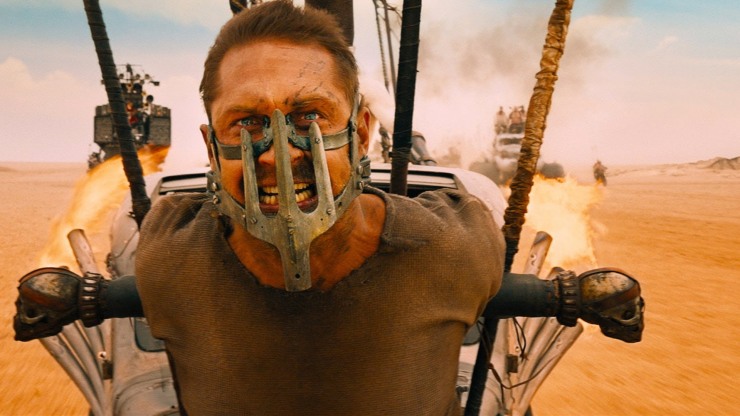 What follows is a continuous chase through raw, post-apocalyptic desert. A story told almost entirely physically, constantly moving forward without screeching to a halt in order to abruptly cut to a scene of dialogue. Far too often convoluted green screen blurs are accepted as spectacular action. Fury Road reaps the rewards of flawlessly combining unbelievable practical stunts with undetectable visual effects. Your eyes never lose sight of the anarchy, the organised chaos is centre stage in all its frantic glory, with each scene escalating and eclipsing the last.

Recast as Max Rockatansky, Hardy manages to impressively encapsulate the essence of the iconic character without impersonating Mel Gibson. Hardy’s tremendous physicality lends itself to a role that’s synonymous with silence. Relying on his hefty presence and only vocalising the essential, much like his predecessor.

Theron absolutely stuns as Furiosa, a heroine in the same league as Ellen Ripley and Sarah Connor. Her unrelenting grit and drive to find redemption propels the story forward, enabling the film to continue roaring to the end credits. In keeping with The Road Warrior and Mad Max Beyond Thunderdome, Max isn’t the focal point. Once more he finds himself in the throes of somebody else’s perilous situation, this time around a fellow warrior’s breakout. The scenes shared by Hardy and Theron erupt with palpable chemistry as their reluctant alliance evolves into a bond that’s almost wordless, cemented instead by selfless actions and knowing glances.

The sheer mechanical heft and muscular structure of Fury Road, along with its desperate characters attempting to outrun their hopeless fate, felt reminiscent of William Friedkin’s masterpiece Sorcerer. Likewise, unforgiving surroundings threaten to engulf our protagonists.

From the abrasive, barren void that’s bereft of life and can no longer sustain the living, to its crazed inhabitants and their thirst for violence. Danger lies in wait across the parched landscapes where scorched horizons against blazing blue skies meet industrial cold chrome and ground-in oil. A distinct and striking colour palette magnificently captured by director of photography John Seale. While conveying the vast emptiness of the crumbling world, the film’s core remains centrally framed, his lens doesn’t stray from the ceaseless action or gentle glimpses of tender interactions.

A fine balance of intense and intimate is elevated by Junkie XL’s truly grand soundtrack. Accelerating with the blistering mayhem and seamlessly slowing for sombre moments of realisation. An outstanding score that smoothly glides from urgently thunderous to faintly wistful.

For all its staggering scale, Fury Road also boasts relevant themes. From the wives defiantly scrawling “we are not things” and “our babies will not be warlords” across their captor’s walls before their gutsy escape. To the manipulated War Boys’ misguided dreams of Valhalla and the destruction of precious natural habitats. Offering stark parallels that resonate, the film emits an unmistakable sense of hope in spite of civilisation imploding and the earth decaying.

Fury Road has broken the mould of the modern blockbuster by fusing jaw-dropping spectacle with a compelling story that’s bursting with rich characters. Not to mention the genuinely bizarre flourishes of creativity that flow throughout, oddities that are usually confined to big-budget movies released a generation ago.

Setting a new standard for the action genre, Mad Max: Fury Road is an adrenaline-fueled ride inside of George Miller’s imagination, delirious territory that I hope we return to soon in future instalments.